God continues to move powerfully through your investment in the Master’s Toolbox Catapult700 project, which was to complete the first floor of the East Africa Training Center, translate the Global Curriculum into Swahili, and to launch 700 new outposts with training and curriculum.

Through the Catapult700 project, funds were raised and teams were sent to partner with the Kenya Royal Rangers in completing the first floor of the Royal Rangers East Africa Training Center. The 4800 square foot center is now even better equipped to continue to meet vital needs for the region.

In August 2019, the training center hosted the 20th anniversary of Royal Rangers in Kenya with participants from throughout the region. In November 2019, thirty-five adolescent boys went through the alternative rite of passage ceremony, known as the Royal Bridging Center (RBC), and seven of them received Christ as their personal Savior. The Royal Rangers ministry in Kenya also reached a new milestone as, for the first time, a young man from a different religion attended RBC and was influenced with gospel. Without Catapult700, the training center would not have been finished in time for these young men to go through Royal Bridging Center and be changed forever. 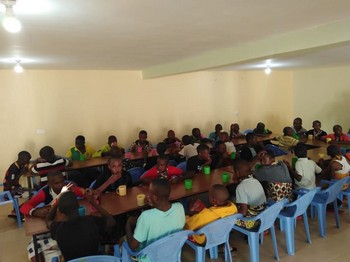 The Royal Rangers ministry in Kenya has also been influenced by the church planting movement that is spreading throughout the Rangers ministries in Africa. At the time this article was written, eighty leaders were to convene at the Royal Rangers Training Center in April 2020 to be trained and sent out to do evangelism work.

Many African countries have sent Royal Rangers leaders and students to unreached villages. To date at least two dozen churches have been started as a result of village evangelism efforts, primarily in Madagascar and Malawi. The Kenya Royal Rangers have already completed one of these outreaches, and they desire to strategically make church planting and evangelism part of their DNA, incorporating it in training events held at the training center.

Our curriculum translation is over 18% complete, based on page count, and the translation team is working toward the 25% goal. When the Leader Manual is complete along with many of the merits, limited pilots can potentially start in the Swahili language. New outposts remain at six (in English-speaking churches).

As you know, all things progress in the timeframe based on the region of the world you are working in. For the United States, we see things as progressing slowly because our culture moves quickly. However, things are progressing on Africa time, but all in all are on a sure footing. We knew the translation would take the longest amount of time to complete. When things are completed and begin to be released, we know that starting outposts will progress relatively quickly for Africa.

Royal Rangers International was scheduled to meet with superintendents from Africa at international meetings last year in Canada and in Spain this year. Both events were cancelled with the event in Spain cancelled due to COVID-19. Please continue to pray that the next meeting will be held on schedule so the RRI team can continue to plan and build relationships with the superintendents in Africa or the furtherance of the gospel through Royal Rangers.

We want to take this opportunity to once again thank all who contributed to Master’s Toolbox Catapult700, which has already made East Africa Training Center a reality for impacting the lives of so many across Africa.