April 27, 2017 is a date that will in infamy at Camp Eagle Rock. Torrential downpours and subsequent 100-year flooding pounded our camp. After the flood waters subsided, only the concrete piers of the newly constructed Stanekville bridge remained. The blue path bridge was uprooted, twisted, and torn apart. The low water crossing bridge that leads to the amphitheater, red pavilion, and southern camping fields was literally pushed out of the ground. Four-foot diameter steel corrugated pipe culverts were mangled and strewn about downstream. Without this bridge, we couldn’t properly access the south end of the camp, and Camporama 2020 would not be possible. 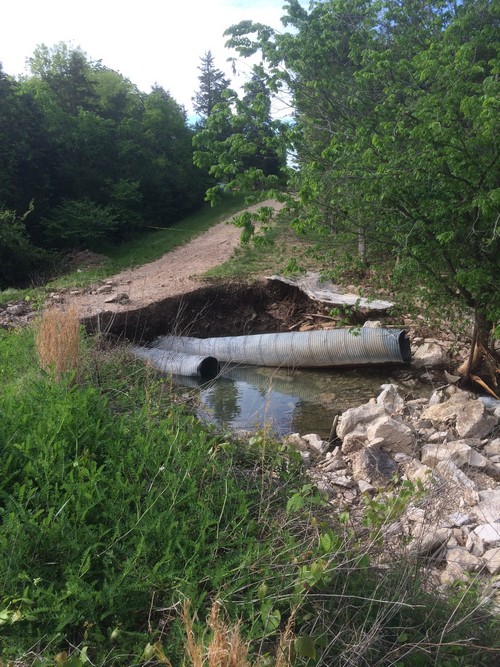 What now? Replace the bridges with what was there before or dare to dream. The national staff opted to dream with the assistance of structural engineer Norm Kirsch and ESC Consulting Engineers. After many discussions, the design of the old low water crossing bridge was set. (Prior to Rendezvous is July 2018, the bridge at Stanekville was replace.) Instead of a number of those large corrugated steel culverts directing the creek waters, we would build a new bridge that is 14’-8” wide, provides a 25’ clear span over the creek, and elevates the bridge surface approximately 8’ above the waters.

The project was publicly bid, and the bid opening was held on May 24, 2019. The lowest responsible bidder was Seven Valleys Concrete, LLC out of neighboring Cassville, MO. Construction was agreed upon to start after the camping season concluded at Camp Eagle Rock.

On September 30, men and equipment arrived at the camp to begin excavating and preparing for the foundation pours pinned to the bedrock. Under the watchful and experienced eyes of Norm Kirsch, the project started quickly and maintained schedule without delay. On Tuesday, November 26, the final inspection of the bridge was completed, and Camp Eagle Rock was now the proud owner of a newly built bridge that will take us into the future.

Other than installing guardrails, the bridge is ready for the vehicle traffic and thousands of campers at Camporama 2020.

A special thank you to Jake Davison, Manager Partner of Seven Valleys Concrete, LLC. Jake’s attention to detail and willingness to make sure our bridge met the stringent requirements of the construction documents was so apparent and appreciated. During the construction, we learned that Jake was a Royal Ranger as a boy. How cool is that?

We want to extend a special thanks to Norm Kirsch, PE and ESC Consulting Engineers for designing our bridge. We especially want to thank Norm, who offered to be our field representative during the construction at no charge; he was truly a blessing to the camp and to Royal Rangers.

Come July 19-24, thousands of men and boys will cross over this bridge to the amphitheater at Camporama 2020 and to have their hearts and lives forever changed.