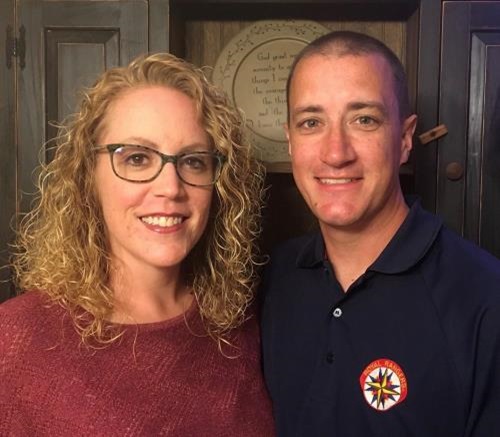 When Rick and Debbie Barnhouse became the managers for Camp Eagle Rock in January 2017, one of Rick’s goal was to find someone to replace him and mentor for a time to ensure the national campground would be well cared for in the future. In the summer of 2019, what started as a friendly conversation with the Barnhouses about the future of Camp Eagle Rock turned serious as Branden and Rebekah Krause spent hours in prayer about assuming the management of the campground. Although this would be a huge change in their lives, the Lord gave them peace surrounding the possibility. In February 2020, Branden and Rebekah Krause because the new managers at Camp Eagle Rock.

Branden grew up in Royal Rangers and excelled as a Straight Arrow, Buckaroo, Pioneer, and Trailblazer at Shrewsbury Assembly of God in Pennsylvania. His parents met as teenagers, and his dad accepted Christ as savior early in their relationship. By the time Branden was born, his parents had been working in their local outpost for several years.

When Branden was 13 years old, his father was diagnosed with colon cancer, which spread to his liver. He died just two years later. He remembers this about his dad, “I can remember the fact that my father hated to camp, never once did he take the family camping, but he would take us boys on every Royal Rangers camping trip possible because camping wasn’t the reason we went, it was to get closer to God. There was always a bigger reason for why he did what he did.”

Branden has constantly had godly men in his life, mostly Royal Rangers leaders but also youth leaders, men’s ministry leaders, friends, and his grandfather. These men taught him the things a young man from a single-parent home needs to know to be successful in a career, in family life, and as a godly man. If it were not for them, Branden’s life could have gone down a completely different path. From the age of two, Branden spent a lot of time with his grandfather learning how to use tools, build things, fix problems, and repair equipment. One of the best things he learned from his grandfather is that no matter what you do, from the simplest project to the most complex, do it as unto God with 100% of your talents.

When Branden was 17 years old, two very significant events happened. First, he was asked to be a Royal Rangers leader. Second, he began dating his future wife, Rebekah (a Missionettes Honor Star recipient, which at the time would have been similar to the GMA in workload). During this period as a young Royal Rangers leader, juggling school, work, and college, he was able to mentor many Adventure and Expedition Rangers.

In this first group of Adventure and Expedition Rangers, four young men impacted Branden’s life like no other group has. Seeing God’s hand in the lives of these boys drove his passion as a young leader. Royal Rangers provided the opportunity for these young men to develop a personal relationship with Jesus and to know where their eternity rested. One young man, also Branden’s brother, currently serves with his wife as Ranger Kids leaders. Another young man became a missionary with the Assemblies of God World Missions. Branden spoke at the funerals of the other two—one died in a car accident and other was killed by an IED while serving in the United States Army in Iraq. They helped Branden understand why Royal Rangers leaders must spend quality time investing in boys’ lives, even the ones who make you pull your hair out.

In 2005 after Branden’s 6-year plan—graduating college with a degree in engineering, landing a full-time job, and buying a house—was complete, he and Rebekah married. Royal Rangers became their primary ministry focus for nearly fourteen years. In 2006, they became the outpost coordinator at Shrewsbury Assembly of God. Their son, Colin, was born in 2009, and their daughter, Paige, was born in 2012. In 2016, Branden was appointed to the role of FCF National Scribe by Paul Walters and continues to serve in that position.

Branden has spent the past fifteen years with American Hydro. He was the Manager of Field Service Operations for American Hydro Corporation, which designs, manufactures, and installs hydro turbine units in the United States and around the world. In this role, he proved his abilities in policy development, safety management, personnel development and training, and project management. He even worked in the field hand in hand with personnel to solve difficult problems.

If all of this wasn’t enough to keep them busy, Branden and Rebekah have spent their married life remodeling homes for themselves and family. In 2016, they founded Breezy Knoll Mercantile LLC as an affordable supplier of 18th century goods. Their company is committed to providing quality, affordable, and historically accurate 18th century reenacting and living history goods at breezyknollmercantile.com. Due to Branden’s demanding full time employment with American Hydro Corporation, Rebekah took on the role of developing and running the business, while he provided vision and oversight from his years of historical study and participation in FCF and secular reenacting.

Now that Branden and Rebekah have taken the positions of campground manager and administrative assistant and conference support, they decided to downsize Breezy Knoll Mercantile to allow them to focus on the needs Camp Eagle Rock. They are helping several other people setup small businesses much like Breezy Knoll Mercantile within their local areas and are mentoring them on how to run a business, manage inventory, and work with vendors.

They said this about their decision to come to Camp Eagle Rock, “A transition to Eagle Rock would be one of the most significant decisions in our life and definitely the most life altering. As terrifying as it may seem for Becky and I to leave our comfort zone, God continues to give us peace about this opportunity.”